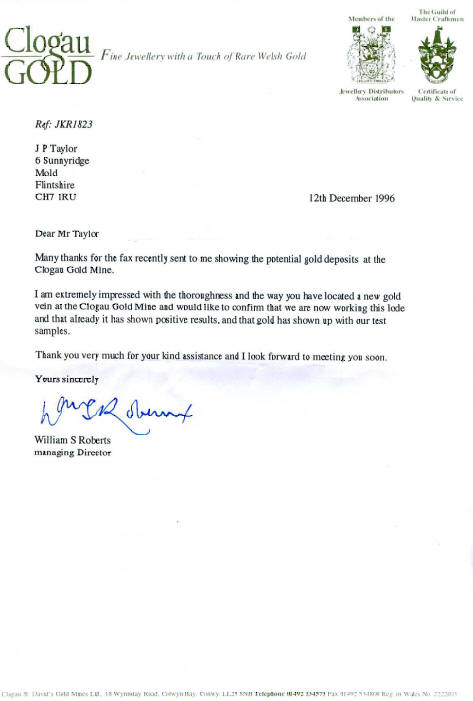 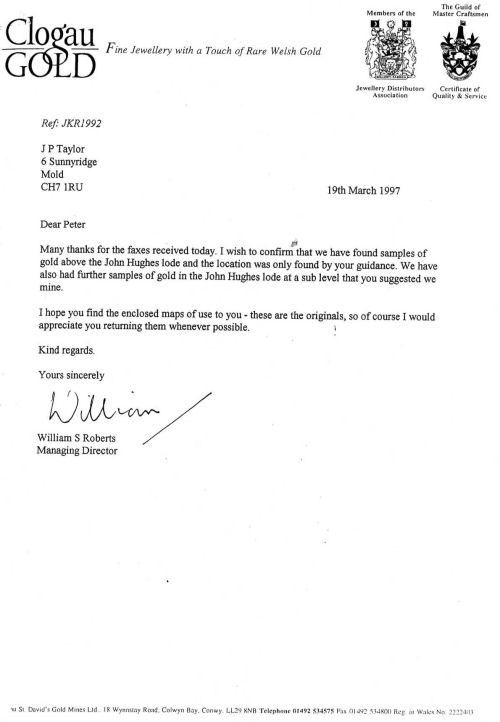 Many people think that the gold in Wales has finished but they could not be more wrong. I myself has worked in the gold mines in Wales as I spent quite some time tracking and finding gold in the Clogau Gold Mine in 1997 assisting in locating natural gold within the rock formations. As you will see when you look at the testimonials on this site I did find gold for the Company at the time. I also spent some time before it closed in the Gwynfynydd Gold Mine so I have got some experience regarding the Welsh gold.

The difference between Welsh gold and the rest of the World is the colour, the colour of Welsh gold is a yellow/green whereas the worlds gold is a more butter colour gold. There is also a high value in Welsh gold compared with the World gold. It can be valued at three times greater than the Worlds gold fortwo reasons, (1) is of its colour and (2) because Welsh gold is so rare and hard to find and this is why I wanted to learn and find out how to find this type of gold because of its rareity and difference.

Regarding previous production of Welsh gold there has been a real high production taken from mainly two of the gold mines, although there were many small ones they had to survive on the alternative minerals which the gold would be amalgamated, such as copper and led, within this part of the world.

In the Clogau Gold Mine it was known that if you hit what is known as silver led you are not far off hitting the Welsh gold itself. I learnt this in 1996 when I worked in the mining tunnel called John Hughes Load . The geologist in 1905 said to the managers of the Mine at that time that there was no gold at the face of the tunnel in that part of the mine as the geology had changed which meant that there would be no gold but in those days they did not have a professional person like myself with the sensitivity to pick up the gold with the techniques that I use.

In 1996 I did find the gold in the John Hughes Load and the reason why they missed it in 1905 at the face of the John Hughes' Tunnel was that the geology had changed because the earth movement had changed and created a fault which had dropped the gold below the existing tunnel face into a different position just 2 feet below the floor of the face of the tunnel within the mine I come across the silver led which indicates the gold will not be far from it at which time I informed the Mining Company that this was the place for them to proceed and dig downwards which they did and found the gold which lasted them for 9 months of continuous extracting. During my time at Clogau near where they called it “number 2 Shaft” I did guide the miners to find another location of gold which turned out to be a gold pod, for those of you who may not know what a gold pod is it is like an explosion of gold from the centre exploding out from the quartz so the density of the gold is in the centre and spread out like a star, in this case the amount of gold found was about 250ozs to 260ozs from the pod. About a year later sadly they closed the mine but has now re-opened with a different company.

And even today there is still plenty of gold in Wales if you know where to look to find it.

I then continued my work to find further gold for them but this time in Gwynfynydd Gold Mine but unfortunately I was only there for a short time as unbeknowns to me they were closing this mine but what I can say is that in the time I was there I did pick up or should I say locate potential gold areas or pods inside the mine and also by what I call “remote viewing” which is working on maps of the site and this was done on both sites.

In today's world with out modern technology we have today with computers and with Google earth I can survey a site anywhere in the world remotely and quickly and fairly accurately to test with m y tools to see if there is gold in that part of the world. It is slightly different to the map surveying but the princple is the same, we connect to that part of the world and then go to that part of the world to confirm the site, this is what I did in the Clogau Gold Mine and the Gwynfynydd gold Mine all those years ago but I did it with ordnance survey maps in those days.

with full references from genuine Gold Mine companies

Why would there be gold left in a mine?

Very often in days gone by the miners would have found a seam of gold, followed it so far, and then they would lose it.

So some of the old gold mines will still carry gold which would be profitable in today's market. These can be located by someone like myself by doing a remote survey then follow up with a site visit.

Using the map search results as a guide I conduct a site survey above ground. If there is any old mine adits (tunnels) on the site I would go inside to see where the seams of gold could be in the old mine workings

When checking inside the mines it is different to checking above ground as you are restricted to the area you have got inside the mine and it is also darker but it can be done and I have done it previously.

It is possible for me to indicate on site more accurately the size of the gold and precious metal including platinum and diamond deposits. It is also possible for me to estimate the quantity of gold or precious metals within the quartz veins and surrounding rocks, possibly the quality as well. All these points can be confirmed by the geologist as well as the field consultant on results. Thus giving a more accurate finding by using both the field consultant and the geologist. 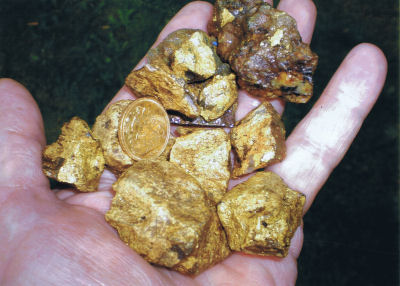 the coin in the hand is a gold sovereign

Global Discovery can save you both time and money in exploration when prospecting for gold.